Battery trouble? Here is what to do!

If you, just like me, didn’t have time to worry about the Metropolis’ battery during the cold winter days and now it won’t start – here is the short walkthrough of what I’ve done so far.

First of all, you need to get to the battery. It’s not that hard, if you know what to do, but not really straightforward. Everything is described in the manual, but I thought I’d show you in pictures. 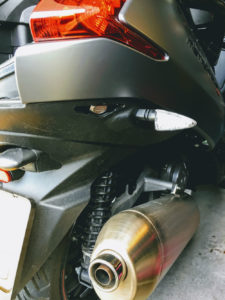 1. Get the lid off the rear lock out first. Open the lock with either the spare key or the key in your fob.
This should be pretty easy. 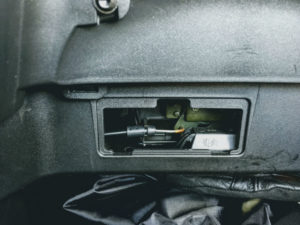 2. Open the read locker, there’s a rectangle lid, behind it is a steel cable. Simply pull that cable towards yourself with a finger to release the seat lock. 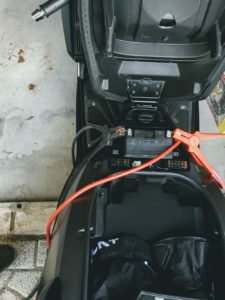 3. Unscrew 2 screws holding the lid next to fuel tank – there’s the battery underneath it. 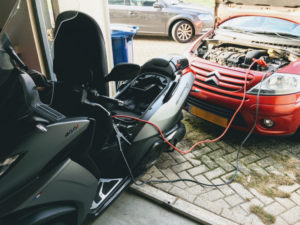 4. Connect either a battery charger to charge the battery or a car to jumpstart it.
(Plus first, Minus second, boys!)

5. Put everything back together as soon as she’s running 🙂

Seems easy, right?. It seemed easy to me too. But… At first I’ve jump-started the Metropolis. It takes about 10 min for the battery to get enough charge in order for the starter to actually start, so you’d better wait some time first. Metropolis started (clocks reset, obviously). I went for a small ride – about 10km, in order to charge the battery. All was OK, got home, put it back in the garage.

Next day it didn’t start again. It did try, so the battery was charged, but 10km didn’t quite do it. 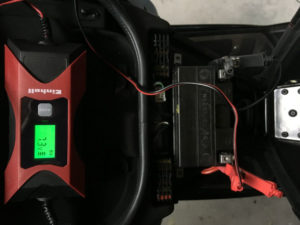 So off I went to buy a battery charger. Got myself an Einhell CC-BC 4M which seemed like a good deal: auto-detect, should be fine with the 12V battery of Metropolis. But it wasn’t.
The battery got recognized as s 6V (while being 12V), mode could not be changed manually, got charged up to 7.5V and then nothing. 7.5 is not enough to start. So off to the shop tomorrow to return this one and try to find a new one…

If your experience is different from mine (for example, after driving 50km battery was charged OK) – let me know in the comments!
I’ll update the story once I get it going 🙂

P.S.: In case you wonder, what kind of battery I’ve got in the Metropolis – it’s a Yuasa YTX-20A-BS / 12V. Be careful, thou – there are at least 3 types of batteries known to be used for Metropolis, all different sizes. (see FB for the discussion). 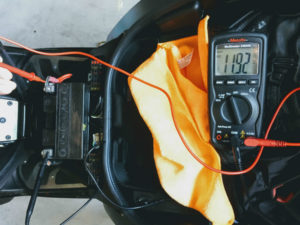 UPDATE: I’ve actually bought a good battery charger/trainer – Optimate4, but in order to find it I’ve covered about 25km in total, which seems to have charged the battery sufficiently. After I came home it had 12,2V, now it’s 11,92, so the battery is holding (more or less), I’ll update in a few days to confirm everything is OK.

For a moment there, I was preparing to replace the battery, since complete discharge is battery’s worst enemy. 🙂