We all know there are different models and lines of Metropolis, but there is one difference between all of them:

At this moment (2016) there are 2 model lines of Metropolis: original (when it was introduced in 2013) and 2015 facelift (which is usually referred to as 2016 model).
The model switch happened somewhere in the 1st or 2nd quarter of 2015. But not many know what those differences are, so let’s put them all together:

Peugeot had listened to customer’s feedback and they have increased the volume of the rear trunk, which is made for your helmet. In that post we are trying to compile a list of helmets, that do fit now. So if you couldn’t fit your helmet in the original model, now the chances are pretty big that any helmet would fit. For example, now it easily fits pretty large HJC IS-MAX II modular helmet as well as big modular Schuberth C3.

But in order to see if you’re dealing with 2016 model, look at the hinges, which open the rear compartment. In 2013 there were hydraulic, in 2016 model they replaced hydraulics with springs.
Not sure if it was a good move and whether they went for better functionality or cheaper production (for example, my 2016 model doesn’t open all the way by itself). 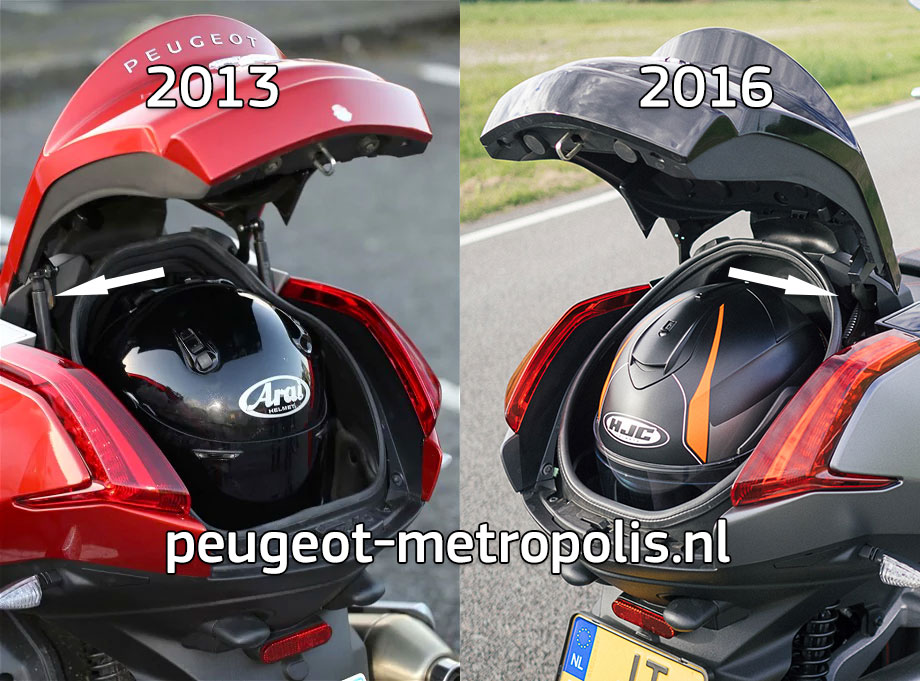 Following is a list of unconfirmed changes (I have no model 2013 to use as reference), so any corrections are welcome.

There’s only one light underneath the seat now, placed in between the seat and rear compartment to light them both.
According to German sources, other differences are in the front wheels…